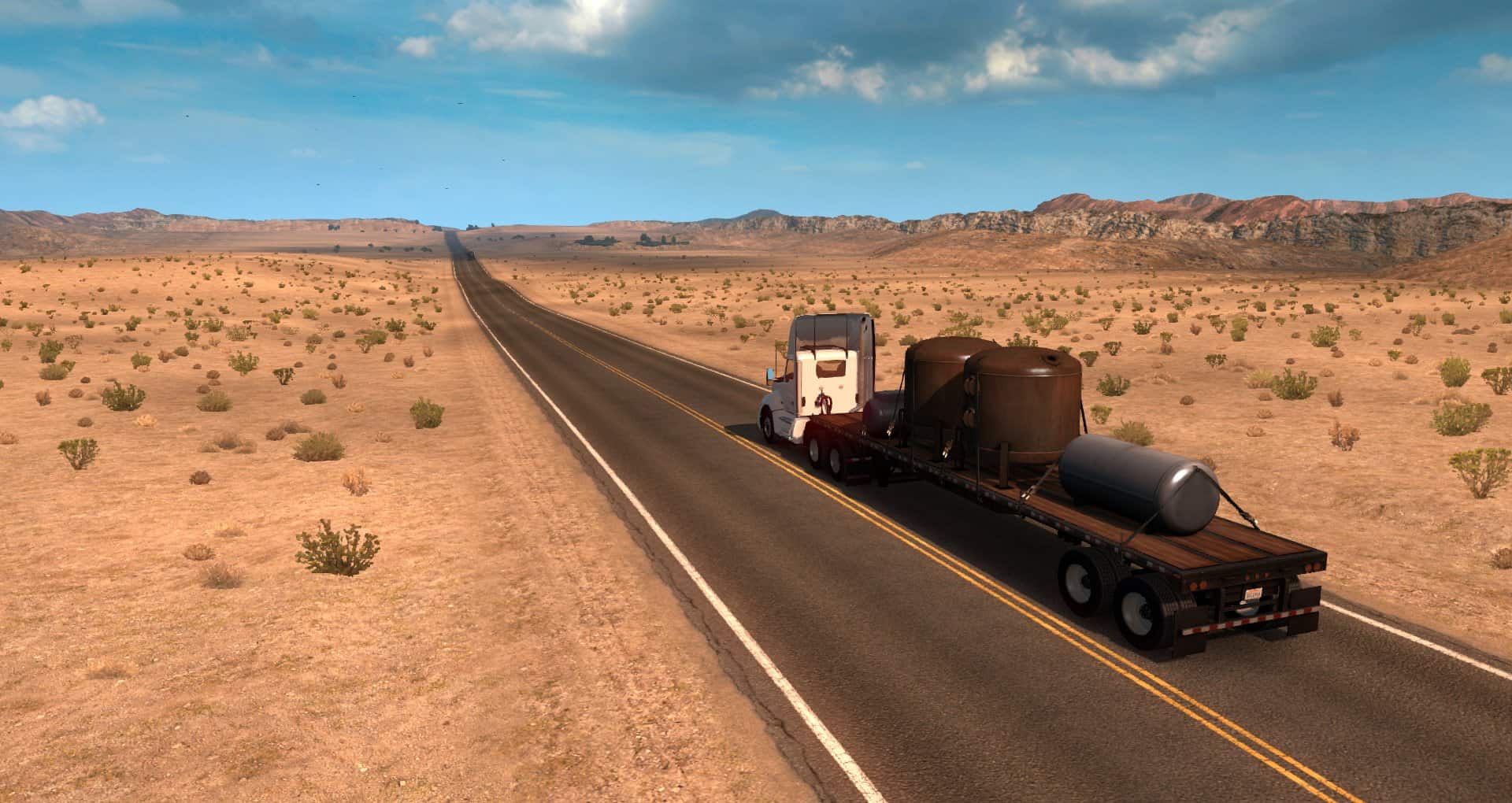 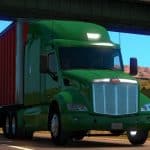 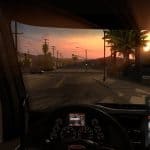 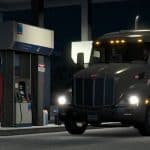 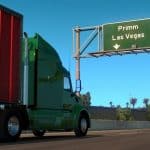 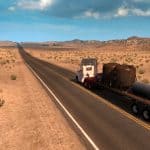 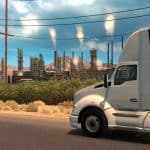 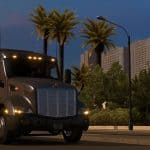 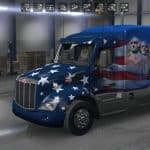 I’m driving down a long, remote desert road in the dead of night. There’s no other traffic and I can’t see anything except the glow of my headlights and the cracked, dusty asphalt ahead. I’m hypnotised by the road, which seems to go on forever. My attention drifts. ‘In the Air Tonight’ by Phil Collins plays on the classic rock radio station I’m tuned to. Then, suddenly, something appears directly in front of me. A shape on the road.

I panic, my heart racing. In a long instant I think: is it a car? An animal? I slam on the brakes and skid to a lurching halt. Then I see it. A tumbleweed rolling lazily across the road in front of me, lit up by the glow of my lights. I laugh at myself and continue towards Los Angeles. I’ve got 30 tons of fertiliser to deliver, and time’s running out.

This is what passes for an anecdote in American Truck Simulator, a game so slow and uneventful that the sudden appearance of tumbleweed is genuinely thrilling. These little moments—military jets streaking across the sky, strange sculptures by the side of the road, trains rumbling past—feel almost like rewards. A brief glimmer of excitement in a long drive across vast swathes of largely empty nothingness.

Like its predecessor, Euro Truck Simulator, it’s a game that is mysteriously compelling despite its mundane subject matter. It’s a fundamentally good game, with weighty, nuanced handling, a deep simulation, and higher production values than most sims. This results in something both very playable and oddly hypnotic. Driving from place to place, obeying the traffic laws, watching the scenery roll by, listening to the radio… it’s incredibly relaxing. 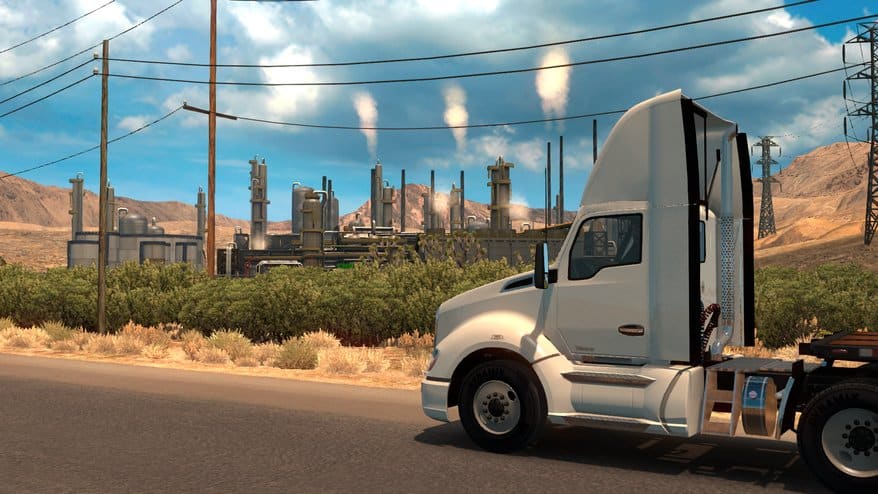 There are two main ways to play. One is working as a freelance gun for hire, taking on delivery jobs where your truck and fuel expenses are provided by your employer. This is the easiest, most accessible way to play, and as you level up you can spend XP to unlock more lucrative jobs including longer hauls and fragile or dangerous cargo. These earn you money that can be spent unlocking the other side of the game: running your own business.

Once you earn enough money to buy your own truck—or take out a bank loan if you’re impatient—you can start your own company. You choose which city you’re based in and can customise and upgrade your truck. Eventually you hire drivers and create your very own haulage network. It’s a fairly involved business management sim, but entirely optional. There’s satisfaction in owning a truck and being your own boss, but I prefer being a contractor so I don’t have to worry about buying fuel or crashing my truck and spiralling into debt when the repair bills come in.

At launch, American Truck Simulator comes with two states: California and Nevada. More will be added over time, but it is slightly disappointing that you can’t yet drive from coast to coast. Still, it’s a huge space, and you can visit cities including San Francisco, Los Angeles, and Las Vegas—and a number of small towns between. Set on the sun-scorched west coast, the scenery is mostly dusty and desert-like, but they’ve captured the look and feel of both states nicely. I prefer the overcast, rain-soaked motorways of Europe myself, but the new setting is detailed and well-made. 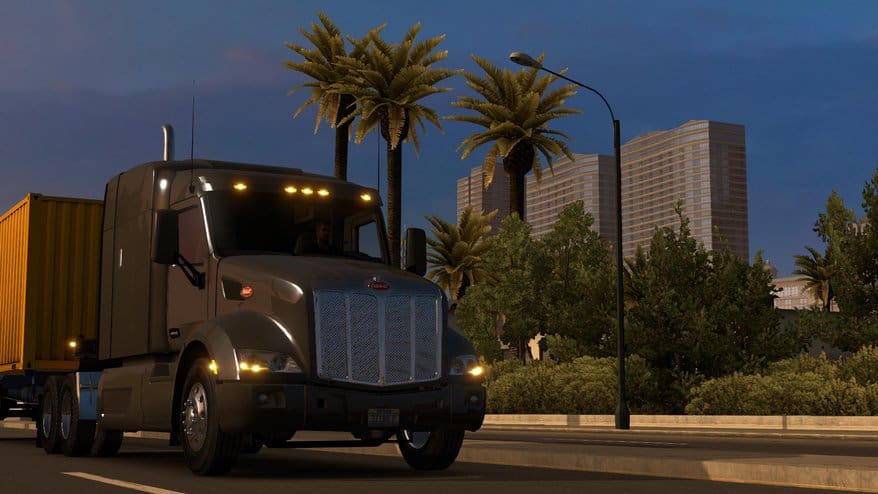 Anyone who played Euro Truck Simulator 2 may find the game a little too familiar in places. The interface and structure are pretty much identical, and it feels like they’ve picked up the old game and dropped it into the new location. Even different colours or visual flourishes on the interface would have been welcome, just to remind you that it is indeed a new work.

As a result, if you were already burned out on ETS, the new setting might not be enough to reignite your passion. It’s a very similar experience overall. The trucks—of which there are only two available at launch—don’t really feel that different to their European counterparts. It’s more like an iteration than a fully-blown sequel.

But if SCS are as tireless and passionate with ongoing updates as they are with Euro Truck Simulator 2, ATS will only get better as it grows. America is a vast, varied country with a lot of different scenery, and more states to drive through will make for more interesting journeys. For now, this is a polished, strangely enjoyable simulator that you can easily lose hours to. But if you want to travel further afield, you might want to wait until there are more places to go to.

What is it? A truck driving and business management sim.
Expect to pay £20
Developer SCS Software
Publisher In-house
Reviewed on GeForce GTX 970, Intel i7-950, 16GB RAM
Multiplayer None