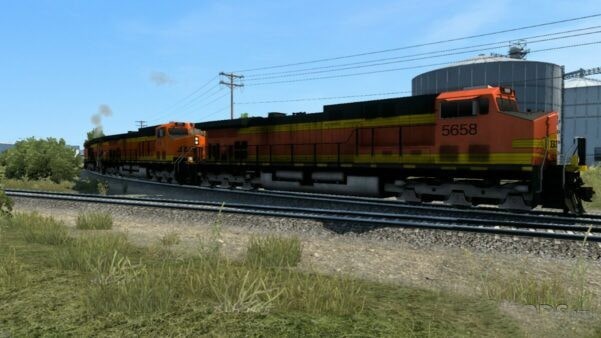 When creating this patch, all the game files involved in it were verified and all changes in the game traffic scripts of the new version of the game were taken into account, which will save not only possible crashes but also errors in the game log, although the mod version 3.8 remains mostly compatible with update 1.42 , I recommend installing this addon in order to avoid unexpected problems.

other changes. increased the ratio of the spawn frequency of es44 locomotives in the BNSF livery and sd40 locomotives in the Union Pacific livery in relation to the standard in-game livery.
new skins are also included in non-mainline local trains (such as trains with airplane fuselages or wind turbine chimneys)
the speed of all freight trains has been slightly reduced
steam locomotives are now necessarily accompanied by a diesel locomotive
files related to car traffic now strictly correspond to the original ones in the game (without making changes affecting car traffic)

This update patch does not replace mod version 3.8 for 1.41, it should be added without replacing the main mod !!!
the presence of the main mod Improved Trains 3.8 is required. this patch should be placed directly above the main mod but below all other 1.42 compatible addons

If you enjoy experiencing real American truck driver life, but at the same time feel a bit bored of the common road, cargos, and trucks, then American Truck Simulator Mods are for you! Step into an American Truck Simulator Driver's shoes and prove that you can deliver the cargo under any circumstance. It is the easiest way to get the best of the game, your opponents will be surprised! Then all you need to do is simply click on American Truck Simulator Update Patch ATS 1.42 for mod Improved Trains v3.8 Mod free download button and implement it to your game. It’s great getting even more than it was expected – that’s why we insist on you to try and test the benefits personally. That could be a great boost to your game and there are no reasons why to react negatively. Choose one of the various ATS Mods and take on new challenges. Driving a truck has never been so exciting!