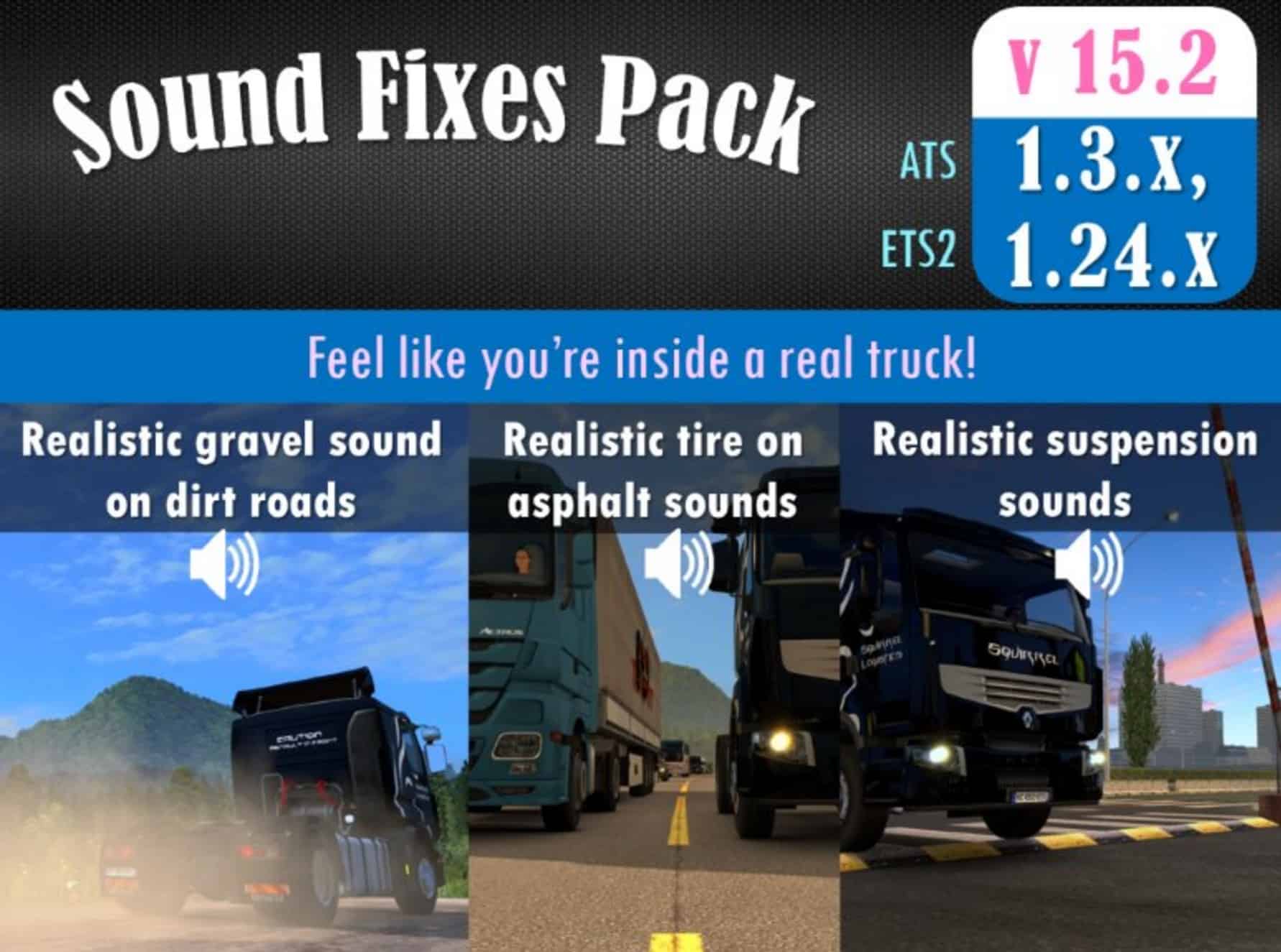 Note: This mod is intended for game version v1.3 and up. It can run without game crashes on v1.2, however you won’t have truck or trailer damage since the damage parameters have a new location.

*FEATURES
1 – Tires: enhanced asphalt tire sounds on normal roads and gravel sounds on dirt roads
2 – Suspension: enhanced suspension sounds to include sounds of cabin squeaking, key swinging and movement of the cabin.
3 – “Late music”: replaced with Nokia phone ringtone sound (volume of this sound depends on Music volume in Audio settings in-game).
4 – “Bing bong” chime for train loading screen sound and ferry loading screen sound.
5 – Reworked garage door sound and corrected its volume to a lower level.
6 – Reduced volume of adviser message sound.
7 – Reduced volume of yawn slightly for fatigue simulation.
8 – Classic/historic ding sound for while the fuel is pumping (circa 1960s to 1970s). The number of dings give you an idea on how much you refueled.
9 – Real fuel pump, fuel lid sounds, door close, seat belt click and key insertion sound effect for after refueling to a full tank.
10 – Mix of stock amplified gear grinding sounds and new gear grinding sounds. Can be heard when you have damaged the transmission and/or gearbox.
11 – Real stick/switch/button sounds for: parking brake, hazard light, wiper stick, blinker / indicator / turn signal, light switch.
12 – Retarder sound changed to real retarder sound.
13 – Lift axle sound now includes button press sound effect in interior.
14 – Real sound effects for trailer coupling + uncoupling. Also includes the sound of the trailer brakes connecting straight after the fifth wheel coupling.
15 – Driver Alert Support system sound installed on all trucks (ETS2 exclusive feature).
16 – AI traffic vehicles given new horn sounds. Depending on the patience of the driver, a short or long honk may be used.
17 – AI traffic trucks/buses given more variations of sounds (turbo, engines, gear changes).
18 – Motorcycles from Jazzycat’s AI traffic pack given proper motorcycle engine sounds.
19 – Motorcycles will rev engine instead of using a car horn when blocked.
20 – AI cars from Jazzycat’s pack that tow trailers will not use semi-truck sounds, instead they will use car sounds.
21 – You can hear the slight sound of vehicles overtaking you or passing by you in the oncoming lane.
22 – At high speeds, wind will sound slightly faster.
23 – Pattering of rain on windshield audible in the cabin during heavy rain.
24 – Prefab (e.g. company and delivery points) soundscape enhanced.
25 – Louder volume and reworked audio for biplanes, trains (included train horns), helicopters, cable cars and Boeing planes.

*SET TIRE AND WIND VOLUME
Wind and tire noise too loud? No problem. You can configure its volume using these developer commands. Syntax is as follows:

*CREDITS
– SCS Software for base sounds
– Drive Safely for pitch, reverberation and sound edits, some sound samples and compiling mod
– antonvezdehod, Ludmilla and Katixa/Irreo for some tire sounds
– Balamut for some key swing and light suspension sounds
– AlexeyP for some trailer coupling and fuel pump sounds
– Stewen for some improved AI truck sounds
– nIGhT-SoN for raindrop definitions