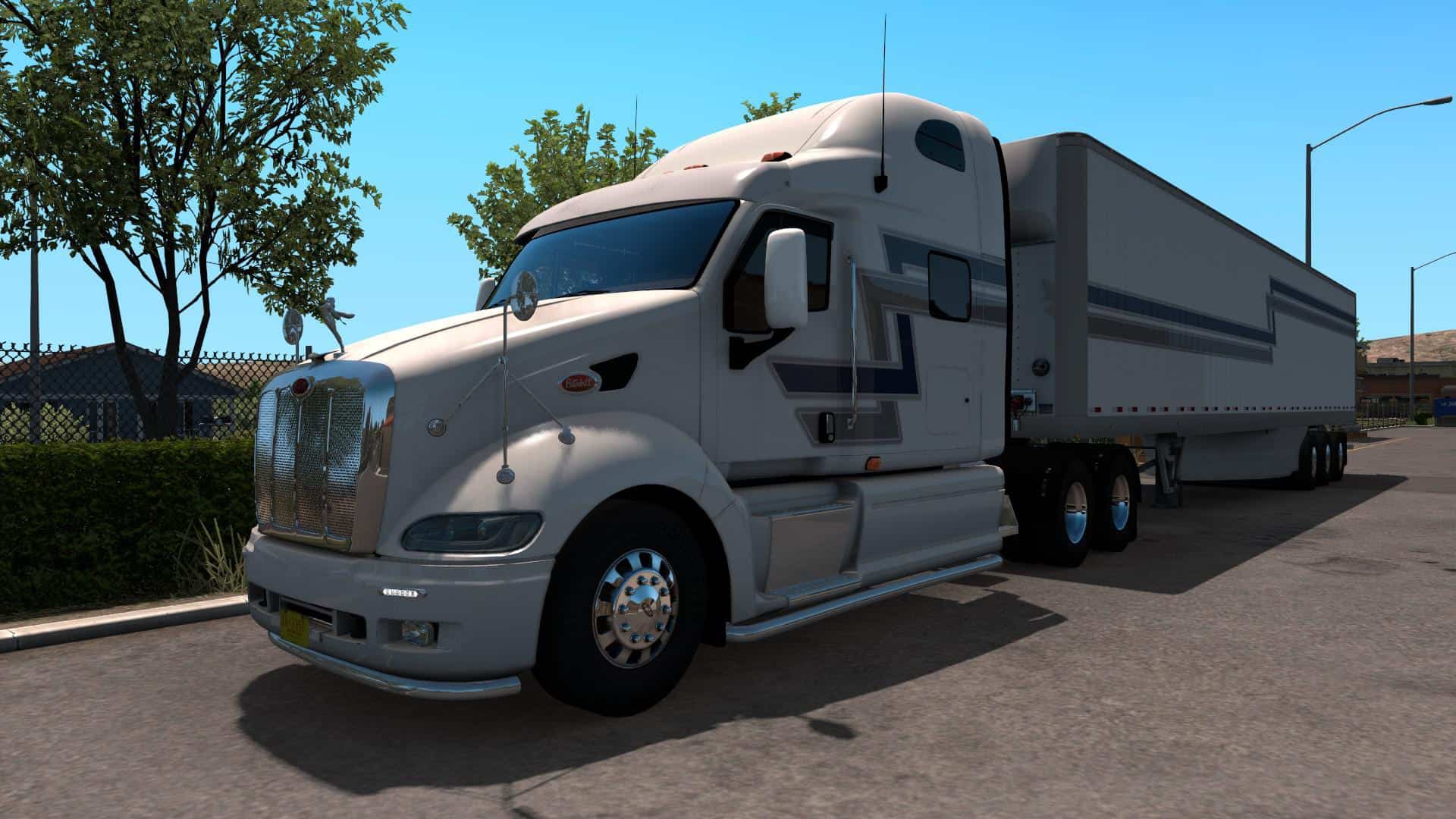 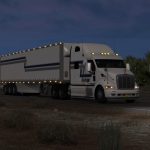 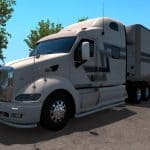 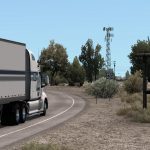 EXTERIOR:
corrections of the dimension mapping on the Projection headlights. From 1.39 onwards, the Proection headlights are orange by default in ATS and white in ETS2.
For owners of the Classic Stripes Paintjobs Pack DLC, one paint has been added (in my opinion, this is the only one that matches the paint of the trailer and the shape of the cabin).

KNOWN FAULTS:
The same as in the previous edition of the mod.

Changes from 12.07.20
EXTERIOR:
multiple edits of materials and textures of chrome parts to improve their appearance.
added chrome version of the rear wings.
for the Midroof and Sleeper cabs, a chrome tool box has been added to the frame on the left behind the cab.
plastic side skirts were added for the Midroof cab option, a template was added for them.
minor texture and mapping fixes for Midroof and Sleeper cabs, updated template.
edits on shadow models.

INTERIOR:
two models of 2DIN radio tape recorders were added (with a CD drive), one of them was also added with GPS or Apple CarPlay mode (in this case, an iPhone navigator is immediately installed).
minor texture fixes.

Changes from 05.05.20
Minor corrections to the previously published version of the mod.
Update for 1.37 (addon in archive)

Changes from 08.03.20
– in the version for Euro Truck Simulator 2, the height of the fifth wheel coupling has been adjusted so that the semitrailer “lies” with the supporting part on the plane of the saddle.
– Fixed registration of the sound of the engine brake.
– The rear-view mirrors are adapted to the new physics (command “g_phys_mirrors 1”).
– hood rearview mirrors are made separately installed.
– increased the number of slots for accessories on the windshield.

Changes 1.3
GENERAL FIXES:
+ The price for the light bar for Sleeper cab is fixed, additional slots above the visor are added to set the upper light.
+ In the registration, the agency’s orders contain internal lighting on versions of tracks for ordinary transportations (i.e., on non-equipped beacons).
+ Added file to improve compatibility with SiSL’s Mega Pack mod.
+ minor edits on the materials.

INTERIOR:
+ Fixed errors displaying raindrops on the upper left window of the sleeping bag in Sleeper cab.
+ Edits on hood mirrors:
+ mirrors are divided into left and right (but remained in the same accessory), are installed in versions both together and separately.
+ Added a second version of the hood mirrors to control the angles of the front bumper.
Note: In Euro Truck Simulator 2, hood mirrors do not work correctly, therefore, to fix this bug, a separate addon with corrected FOV values has been added. Keep in mind that during its installation conflicts with other mods using the game_data.sii file are possible (for example, with maps, so carefully study the mods used before installation!)
+ Added beige interior options to all cabins. Now, for each of the cabins, taking into account all possible trim combinations, 24 interior options are available – with two types of upholstery (gray / beige), three types of decorative panels (wood / plastic / wood + plastic) and four types of appliances (standard / standard + BK / second generation / chrome finish). Changing the colors of the interior on the external model is also implemented as far as possible. Beige color options are also added for the corresponding accessories – curtains, a table on the panel.
+ Changed the texture of the upholstery of the sleeping bag.
+ Added curtains fastened to the windows of the sleeping bag.
+ In the version with chrome trim added chrome salaries for the right block of keys on the dashboard.
+ Added designations for the wiper operating modes (on the left steering column control).
+ complemented by animations:
+ keys of marker lights;
+ alarm keys;
+ keys to turn on the internal light / flashing beacon;
+ right steering column control (trailer brake control valve, it is also a “parachute”);
+ retarder keys (a motor brake force selection button to the right of the motor brake key is assigned to it, a small artistic fiction for the sake of gameplay);
+ keys and differential lock indicator;
+ WPASS indicators;
+ warning / critical error indicators.
+ removed as further unnecessary accessory transponder for passage weight (WPASS).

Credits: Ch_Vitalik is an external model.