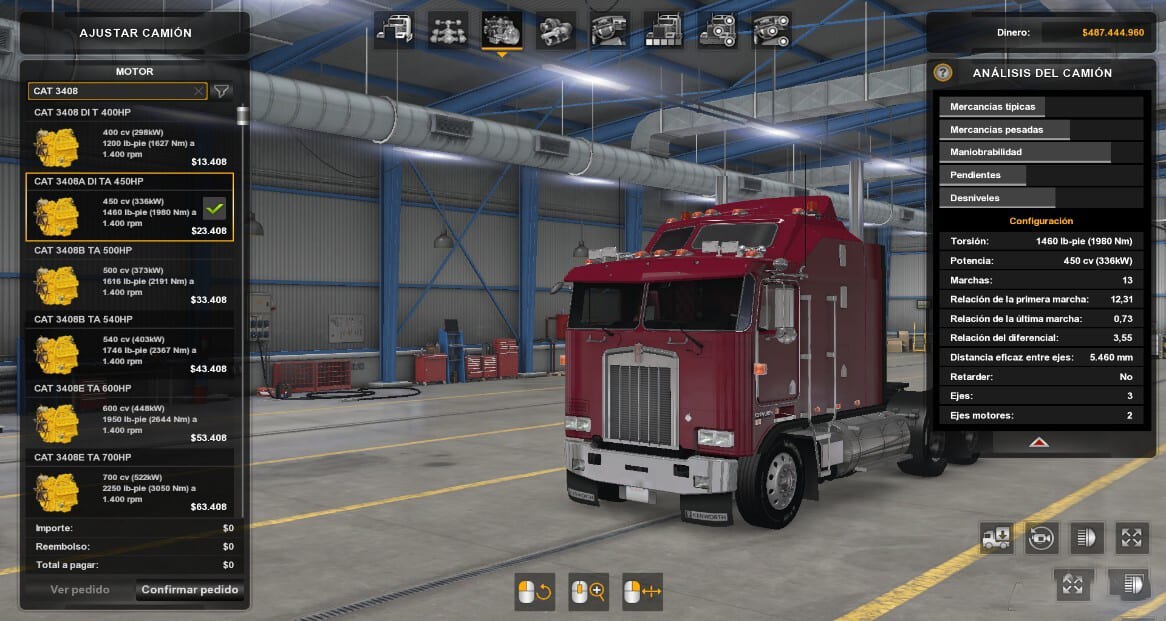 This mod has the sounds of a Caterpillar, model 3408 V8 eight cylinder engine, with the most realistic torque measurements possible. It contains the electronic ignition of the engine. Adapted to versions 1.39 and later made in FMod, according to SCS requirements.
You will find seven horsepower options for this engine ranging from 400HP up to 800HP. It also includes a 15 speed compound transmission with 6 final drive ratio options (from vanilla 3.23 up to 4.63)

Please do not change in the mod data, or it may cause game errors. If you know how to modify them, you are at your own risk and expense, and don’t share it with anyone other than yourself.

Thanks to vsTerminus for the permission to use their sound mixes, and to YouTube user gm16v149, for recording it.

Important:
– Use a compression / decompression program (WinRar, 7Zip), download the archive, extract the folder and put it in the Mod folder of your game.

– Do not upload the mod to other links, keep the original (Sharemods). If you know how to modify the data, that it is only for personal use, otherwise, do not modify it.

Uptades:
1.2.1
– The unofficial version was uploaded by mistake, as there were unrealistic engines so it is no longer available in this version (I’m very sorry if someone was bothered).
– Added support to the Freightliner FLD (Harven).

If you enjoy experiencing real American truck driver life, but at the same time feel a bit bored of the common road, cargos, and trucks, then American Truck Simulator Mods are for you! Step into an American Truck Simulator Driver's shoes and prove that you can deliver the cargo under any circumstance. It is the easiest way to get the best of the game, your opponents will be surprised! Then all you need to do is simply click on American Truck Simulator CAT 3408 engine pack v 1.2.1 (for versions 1.39 and 1.40 beta) Mod free download button and implement it to your game. It’s great getting even more than it was expected – that’s why we insist on you to try and test the benefits personally. That could be a great boost to your game and there are no reasons why to react negatively. Choose one of the various ATS Mods and take on new challenges. Driving a truck has never been so exciting!