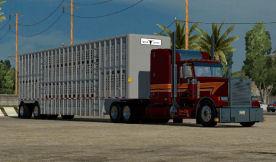 48FT Wilson Silverstar Spread Axle for American Truck Simulator
So…we are releasing our Wilson cattle pot project in its early WIP uinfinshed form because this is the version that was “leaked,stolen and hacked. The only reason we are doing this is because we want credit for all the work we put into it. It was supposed to be a part of a complete multi species livestock trailer pack but the project was derailed by this foolishness and when finished it will be kept private.This is also a locked file as was the “leaked” version so, if you want to try and edit it and be labled a hacker thats on you. There will be no updates and this will be the absolute last mod we will release. You can thank community worms Matt Ricco and Kris Turner for taking away the opportunity for all of you to have the entire finished pack. Nice job guys.Hope it was worth it.